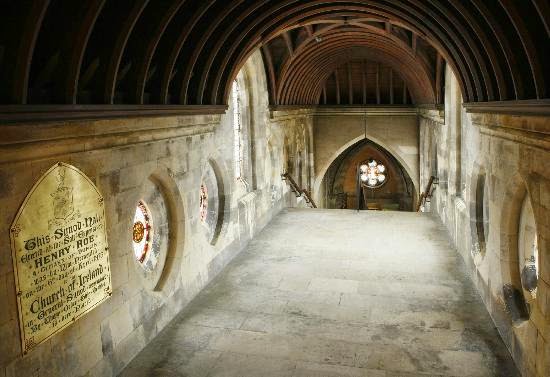 Passage to the Synod Hall, Dublin

William de Hotham was confirmed in the archbishoprick by the provision of the pope who annulled the election of Thomas de Chadsworth. William was born in England educated at Paris where he took the degree of doctor of divinity in 1280, afterwards became a Dominican friar and was twice provincial of the order in England. As ambassador at Rome from King Edward I, he executed his business with great eclat being inferior to none in learning virtue integrity and judgment in the management of affairs the pope gave him authority to select any prelate whom he would choose as his consecrator. It seems he was consecrated in 1298 at Ghent by Anthony Beake, bishop of Durham. Having been the mediator of a truce between Philip IV of France and Edward I of England, which continued for two years, he returned to Rome with the articles of the treaty which the pope had established and on his journey homewards through Burgundy he became ill at Dijon where he died in a monastery of his order on the 27th of August in the same year. His body was conveyed into England and buried in a Dominican monastery of London. Bale, though aspersing his character and that of the pope who promoted him, as if the mediation of gold was all powerful, allows that he was a man highly extolled by the writers of his own order as a person of great spirit acute parts and possessed of a singular dexterity in conciliating the favor of men.

Richard de Ferings, who had been archdeacon of Canterbury during fifteen years before, succeeded in 1229, the king objecting to receive his fealty because of some clauses in the letters provisional of the pope which he considered prejudicial to the royal prerogative. Richard obtained the temporals by renouncing any benefit therefrom. Immediately after his consecration the prelate applied himself to compose the misunderstanding between the cathedrals of Christ church and St Patrick's. The agreement was reduced to writing and fortified by the common seal of each chapter, with a penalty annexed. The heads of it are as follow: That the archbishops of Dublin should be consecrated and enthroned in Christ church; That both churches should be called cathedral and metropolitan; That Christ church as the greater the mother and the elder should have the precedence in all rights and concerns of the see; and that the cross, mitre and ring of every archbishop, wherever he died, should be deposited therein; and lastly, That each church should have the alternate sepulture as a right of the bodies of the archbishops unless otherwise directed by their wills. Having thus, as he thought composed, the jealousies that existed between the cathedrals, the archbishop resided for the most part abroad, having constituted Thomas de Chadsworth his vicar general. His absence having operated injuriously to the affairs of his province, he at length became sensible of the dereliction of his duty and on his return from Rome, with the object of retrieving the detriment, he was seized with a sudden illness of which he died on the 18th of October 1306.

John Leech succeeded to the see in 1310 by the influence of King Edward II, to whom he was chaplain and almoner. Havering, who was bishop elect and confirmed without consecration enjoyed the profits of the see four years and then voluntarily resigned. On the application of John Leech, Pope Clement V issued his bull for founding an university for scholars in Dublin but a design so creditable to the memory of Leech was frustrated by the revival of the contest concerning the primatial right. Archbishop Leech was constituted lord treasurer of Ireland in the close of the year 1312 and died soon after on the 10th of August 1313 and was buried in Westminster.

In the meantime, the usual dispute arose between the Cathedrals regarding the appointment of a successor, one party declaring for Walter Thornbury, chaunter of St. Patrick's, and chancellor of Ireland, the other for Alexander de Bicknor, the descendant of an English family, then prebendary of Maynooth, and treasurer of Ireland. Walter on his election embarked for France where the pope then held his court but on the night of his departure a storm arose and Walter with a hundred and fifty six others perished. Alexander de Bicknor took a journey to Lyons with the king's letters earnestly recommending him to the pope as a man of profound judgment morality integrity and circumspection in spiritual and temporal affairs, yet his confirmation was postponed, as the sovereign required his personal services. At last John XXI confirmed his appointment to the see and Alexander de Bicknor was consecrated at Avignon by Nicholas de Prato, cardinal of Ostia, on the 22d of July 1317. He arrived in Dublin as archbishop and lord justice of Ireland, and was received by clergy and people with great acclamations of joy on the 9th of October 1318. Pope John XXII wrote to him, the archbishop of Cashel, and to the dean of Dublin, to excommunicate Robert Bruce and his adherents and also his brother, Edward, if they did not make restitution for the ravages murders robberies and burning of churches committed by them throughout the kingdom. In 1320 he founded an university in St. Patrick's, Dublin, which was confirmed by Pope John XXII public lectures were established but the deficiency of the endowment rendered the project abortive. The heretics of Kilkenny who were obliged to fly from the authority of their bishop took shelter in the archdiocese of Dublin and were protected from prosecution by de Bicknor. Ledred, bishop of Ossory, who was kept in confinement seventeen days by these heretics would have appealed to Rome in support of his prosecution but he found considerable difficulty even in getting out of Ireland in consequence of the steps taken by de Bicknor to prevent him. The bishop of Ossory did however pass over to France where he was detained by the power of King Edward. In this exile he was forced to remain nine years and in the interim the Archbishop de Bicknor seized the profits of the see of Ossory until he was compelled by the pope to withdraw his metropolitan power over the see of Ossory and this interdict lay over the diocese of Dublin until de Bicknor's death.

In 1349 the contest relative to the primacy was renewed with vehemence between de Bicknor and the primate of Armagh. On the 14th of July in the same year de Bicknor died having governed the see almost thirty two years. Ware says of him that he was not inferior to any of his predecessors in point of probity or learning but let the reader judge of his sheltering heretics and maltreating the bishop who prosecuted them.

John de St .Paul, prebendary of Donnington in the cathedral of Fork and canon of York, was by the pope advanced to the archbishoprick on the 12th of September 1350. De St. Paul was appointed chancellor of Ireland with a salary of 40 per annum, an office which he held six years. In 1351 the pope commissioned him to make inquiry regarding those who were accused of heresy and who fled into the diocese of Dublin and to bring them to punishment according to the canons. He thereupon restored the jurisdiction of Dublin over the see of Ossory. Having sat in the see about thirteen years he died on the 9th of September 1362 and was buried in Christ church. This prelate much enlarged and beautified the church of the Holy Trinity having built the choir at his own expense.
Posted by Unknown at 22:20