From Walsh's History of the Irish Hierarchy: With the Monasteries of Each County, Biographical Notices of the Irish Saints, Prelates, and Religious, 1854, c. xliv, pps. 421ff: 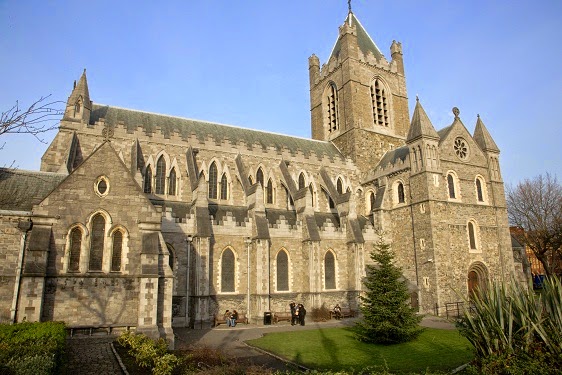 Priory of the Holy Trinity commonly called Christ church. Sitric the Danish prince of Dublin is said to have given Donatus the bishop of that see a site on which to erect a church in honor of the blessed Trinity. The year of the grant is marked in the black book of Christ church as taking place AD 1038.

On the advancement of St. Lawrence O'Toole to the see of Dublin AD 1163 he instituted the canons regular of the order of Arras instead of the secular canons.

AD 1176 died Richard earl of Pembroke called Strongbow of a cancerous sore in his leg and was interred in the church of the Holy Trinity within sight of the holy cross.

AD 1546 the tomb of a bishop who had been many centuries interred was this year opened the body was found whole and uncorrupted with a gold chalice rings and episcopal vestments.

Relics religiously preserved in this church: A crucifix said to have spoken the staff of Jesus; St. Patrick's altar; a thorn of our Saviour's crown; part of the Virgin Mary's girdle; some of the bones of SS Peter and Andrew; a few of those of the holy martyrs St. Clement, St. Oswald, St. Faith, the abbot Brendan, St. Thomas a Becket; St. Woolstan bishop of Worcester and St Lawrence O'Toole, all of which have been destroyed by the English reformers of the sixteenth and seventeenth centuries in detestation of popery and idolatry.

The cloisters and other buildings attached to this magnificent church have been removed, the church alone remains, reminding the spectator of the splendor of ancient days and of the piety and faith of the Catholic church as exemplified in works of art and architectural taste. The court yard and the aisles of Christ church are at present nothing more than the promenade of the idle and the curious.
Posted by Unknown at 22:06 No comments: 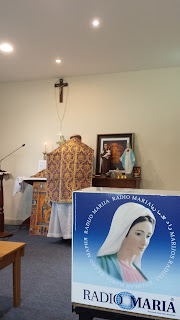 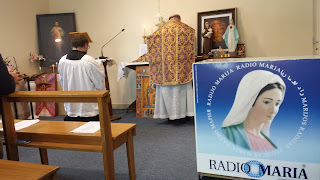 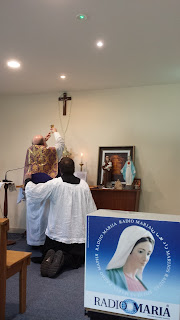 Posted by Pilgrimages Committee at 19:44

A Latin Mass for Lent 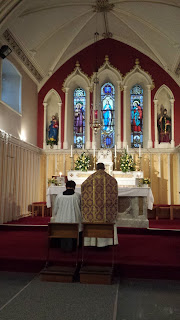 Posted by Pilgrimages Committee at 21:25 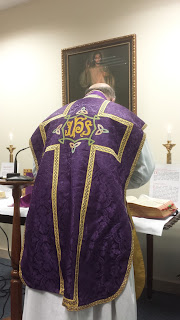 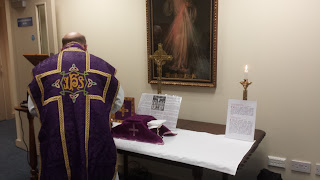 Posted by Pilgrimages Committee at 18:13 No comments: 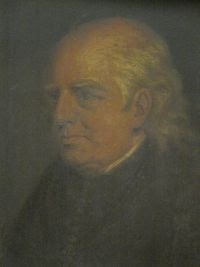 Patrick Fitzsimon, dean of Dublin and parish priest of St Audeon's, was appointed to the archdiocese, a dignity which he filled six years in a manner solely ecclesiastical and unobtrusive. It is worthy of remark that his prudence and judgment were preeminently evinced on the occasion of the test oaths when the Pope's nuncio at Brussels, Ghillini, denounced them and directed an authoritative remonstrance against them, which he designed to be circulated as a pastoral throughout the province. These oaths were projected as a security by the government in the event of conceding emancipation to the Irish Catholics. The archbishop suppressed the nuncio's remonstrance. The Irish parliament in the last year of this prelate's life issued an order to the parliamentary archbishops and bishops of the kingdom to make out a list of the several families in their parishes, distinguishing Protestant from Catholic, and also of the several popish priests and friars residing in their parishes. Having attained the age of seventy six years, the archbishop died in Francis Street, Dublin AD 1769

John Carpenter succeeded on the 3d of June, 1770. Having passed to a foreign university, Lisbon, to acquire his education and degrees, he was, on his return to his native city of Dublin, appointed curate in St Mary's parish chapel. Early in his missionary life, he was involved in the political struggles of the day and engaged with Lord Taaffe, who was the venerable mediator of the Irish Catholics, but they were then considered of too little importance to be noticed by the government. On the death of Archbishop Fitzsimon the regulars of the province anxiously solicited the translation of De Burgo, bishop of Ossory and the author of Hibernia Dominicana, to the see of Dublin, however, through the influence of the earl of Fingal, Charles O'Connor of Belanagare and others of the Catholic nobility and gentry and the hearty concurrence of the Dublin clergy, the promotion of Doctor Carpenter was effected. He was consecrated in Liffey street chapel by Anthony Blake, the primate of Armagh, assisted by the bishops of Kildare and Ossory. In November, 1778, Doctor Carpenter, seventy of his clergy and several hundred Roman Catholics of the laity, attended at the court of king's bench in Dublin and took the oaths prescribed by the act of parliament for the relief of the Roman Catholics of Ireland. On the 29th of October, 1786, Archbishop Carpenter closed his mortal career in the fifty ninth year of his age and was buried in St Michan's churchyard, Dublin. He was not a prelate gifted with any remarkably splendid talents.  They were more distinguished for sound judgment strong memory and diligent research.

John Thomas Troy succeeded in 1786 was born near Porterstown in the county of Dublin. At the early age of fifteen he went to Rome to prosecute his studies there assumed the Dominican habit and at length became the rector of St Clement's in that city. In 1776, on the death of De Burgo, bishop of Ossory, the pope selected this divine as worthy to fill his vacant chair. He was accordingly consecrated at Louvain on his way homeward by the archbishop of Mecklin assisted by two mitred abbots.

On arriving in his diocese of Ossory he revived the ecclesiastical conferences of the clergy that were from necessity discontinued. In January, 1779, and again in October of the same year, he published very spirited circulars against the system of whiteboyism then prevalent and caused excommunication to be solemnly pronounced against all those who were engaged in its folly through all the churches of his diocese. In 1787, he issued pastoral directions to his clergy in which they were strictly prohibited the future celebration of midnight masses by which the festival of Christ's nativity was ushered in and that none should be celebrated before six o clock in the morning.  He forbade any priest secular or regular from appearing at hunts races or public concerts. In 1793, Doctor Troy published pastoral instructions on the duties of Christian citizens, which were impugned as favoring republicanism but the whole scope of his writings was to show that Roman Catholics adhering to the principles of their Church are loyal and good subjects because their religion inculcates obedience to constituted authority and to the power that is established under any form of government. His loyalty to the throne was too well known to be thus rashly assailed and in the subsequent troubles of the country he denounced sentence of excommunication against any of his flock who should rise in arms against the government whereby his life was endangered as a conspiracy was formed to murder him.

In 1795 was founded the royal college of Maynooth an institution intended solely for the benefit of those who were educated for the Catholic priesthood of Ireland. The buildings cost thirty two thousand pounds and were far from being sufficiently extensive to give accommodation to the students. The annual grant from parliament heretofore amounted to £8,000 sterling. In 1807, an application for an increase was made and the additional sum of £2,500 was obtained at which amount the annual grant continued until the year 1844, when Sir Robert Peel pressed by the repeal agitation endowed the college thereby preventing the annual display of parliamentary bigotry by which the establishment as well as the faith of the Catholics of Ireland was assailed and insulted.  Its present income is £26,300 sterling.  New buildings have been recently erected at an expense of £30,000 in a manner and style befitting the national college of the Irish church. Before its endowment the Very Rev. Michael Montague of Armagh, for many years burser of the college and subsequently president, by a wise economy and by a desire also to add to the comforts of the students was enabled to erect the structures that are set apart for the junior students. At the period that this important concession was made to the Catholics of Ireland intercourse with the Continent was suspended and consequently the means of education were beyond the reach of the students who were intended for the service of the Catholic Church. The government wisely resolved to provide them a suitable education as it was debarred them abroad and as its deprivation was a proscription beyond man's endurance and one to which no people should submit. It is then to the liberality of an Irish parliament consisting as it did exclusively of Protestants and to its judgment the native talent of Ireland is no longer obliged to search for education in the land of the foreigner. Perhaps too the fear of imbibing revolutionary ideas on the Continent operated powerfully on the Irish senate as they could not but understand the unwise policy of having the priesthood of Ireland educated in countries which cherished interests passions and prejudices directly hostile to the government under which they were to live and of having them return home with feelings of gratitude to those people who had offered them an asylum and averse to those who had at home proscribed their education. The college of Maynooth can vie with any similar establishment of Europe in piety discipline and talent

In 1814 a contest arose between Doctor Troy and the grand jury of the city of Dublin relative to the Catholic chaplaincy of the jail of Newgate.  The grand jury having appointed one, Doctor Troy, on the plea of incompetence, suspended him.  The former appealed to the court of king's bench but were informed that, if the person they selected was not to be found at his post they must proceed to nominate another and to continue until the office was substantially filled. The grand jury, however, adopted a different course and sent an order to the prison that no Catholic clergyman should be admitted except him whom Doctor Troy had suspended.  A disgraceful and protracted strife ensued and under the protection of an old penal enactment continued to maintain a clergyman in an office of importance who was disqualified by his legitimate superior.

In April, 1815, Archbishop Troy laid the foundation stone of his metropolitan church but he lived not to witness its completion. He departed this life on the 11th of May, 1823, in the 84th year of his age and was buried in the vaults of the temple he was founding. Doctor Troy was a truly learned and zealous pastor attached to the glory of God and his church and to the honor of the holy see, solicitous of and vigilant in the discharge of his duties for the good of those entrusted to his charge and of the state of which he was a member, meek and unassuming so that the humblest child of his diocese could approach him with confidence and affection.
Posted by Unknown at 23:18 No comments: