From Fr. Walsh's History of the Irish Hierarchy With the Monasteries of Each County, Biographical Notices of the Irish Saints, Prelates, and Religious, 1854,c. xliv p. 427. 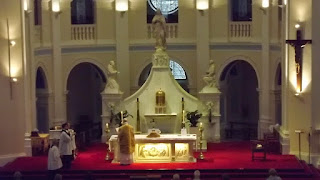 Monastery of St. Francis was erected in the year 1235, Ralph le Porter having given the site in that part of the city now called Francis street and King Henry III patronizing the building.

AD 1293 King Edward I granted a pension of thirty five marcs yearly to the Franciscans of Dublin, Waterford, Cork, Limerick and Drogheda.

AD 1308 John le Decer mayor of Dublin built a chapel in this monastery in honor of the Virgin Mary.

AD 1309 Roger de Heton guardian of the order in Dublin and Walter de Prendergast lecturer of the same were witnesses against the knights Templar. A provincial chapter was held in this year in the monastery of St. Francis.

AD 1332 died their generous benefactor John le Decer and was interred in this monastery.

In the twenty fourth of Henry VIII the convent with its appurtenances, four houses in Francis street and six acres of meadow near Clondalkin, was granted to Thomas Stephens to be held in capite forever at the annual rent of 2s Irish.

The Franciscans are again established in Dublin and have erected a splendid church on Merchant's quay.
Posted by Unknown at 14:59