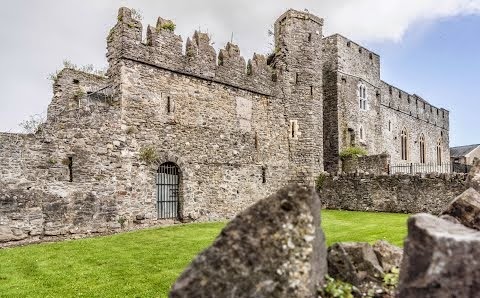 Swords in the barony of Coolock six miles north of Dublin. By some attributed to St. Columbkille.

St. Finan surnamed the leper from his having been afflicted with some cutaneous disease during thirty years of his life governed the monastery of Swords and very probably was the founder. He was a native of Ely O Carrol then a part of Munster and was of an illustrious family. Two other monasteries are attributed to St. Finan, the celebrated monastery of Innisfallen, an island in the lake of Killarney, and that of Ardfinan in the county of Tipperary. Finan spent some time of his life apparently as abbot of Clonmore which had been founded by St. Maidoc of Ferns. The house of Swords was his principal residence and probably the place of his death. St. Finan died in the reign of Finachta, monarch of Ireland. The day of his death is marked in Irish and foreign martyrologies at the 16th of March. He is said to have been the disciple of St. Columbkille but, as his death is placed between the years 675 and 695, he could not have been the disciple of that saint who died in 597.

Swords is called Surdum Sancti Columbae, a name it may have received from its being of the order of St. Columba.

A.D. 965 died the bishop of Swords, Aillila son of Moenach. Here again we meet with bishops in the vicinity of Dublin both at Lusk and Swords.
A.D. 1012 the Danes reduced the town to ashes.  In 1016 renewed their ravages
A.D. 1025 died Marian Hua Cainen, bishop of Swords. He was surnamed 'the Wise.'
A.D. 1042 died the archdeacon of Swords Eochogan, a celebrated scholar and scribe of this monastery.
A.D. 1135 Connor O Melaghlin, king of Meath, sacked and wasted the towns of Swords and Lusk. He was slain in the expedition.
A.D. 1138 the reliques and churches were destroyed by fire.

Nunnery. In the fourteenth year of the reign of king Edward IV, A.D. 1474, there is an actual grant by Parliament of twenty shillings yearly from the crown revenue to Eleonora prioress of Swords and her successors. No more recorded of it.
Posted by Unknown at 17:20