On May 21st, two of the first heroes to die in the Siege of Malta were the Portuguese knight Fra Bartolomeo Faraone and the French knight Adrien de la Riviere.

After the initial arrival of the Turkish force on May 18th, the following day, the 19th, the Turks landed at Marsaxlokk and proceeded to the village of Zejtun and start robbing whatever crops and livestock they could find. They were met by a cavalry detachment, led by these two brave Knights, which had been dispatched by La Vallette to shadow the Turkish troop movements. Both were captured by the Turks and interrogated by Mustafa` Pasha` himself who wanted to know which was the weakest point in the local defence to attack Birgu. Finally after various methods of torture we employed without success molten silver was poured into their ears and they divulged that the weakest point in the knights defenses was at the Post of Castille. In fact the Post of Castille was the most strongly defended and it is a testament to the honor and bravery of these two knights who must have known that when the truth became known they would undoubtedly be put to death for their deception. 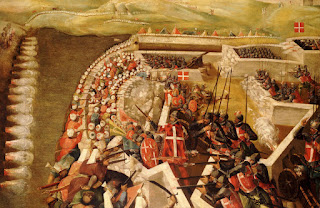 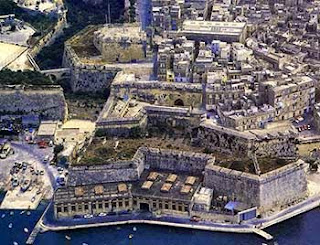 Trusting the information given up under severe torture, Mustafa Pasha sent a substantial force to attack Birgu. The advance troops outpaced the main body of soldiers and were met by a number of eager young knights who sallied forth from their fort much to the chagrin of the Grand Master watching from Fort St. Angelo. He later gave orders that no troops were to leave their positions without his express command. But on this first engagement the knights were victorious and what could have been a disaster for them instead became the first defeat for Mustafa's army and the loss of several hundred of his soldiers to twelve knights of St. John.

*Bastinadoed is a form of corporal punishment where the feet are tied together and then the soles of the feet are whipped with a cane or similar object. This cause intense levels of pain.

The picture is of the Hornworks of the Post of Castille. Much work is being done to renovate the area including the removal of many structures added after the Siege such as those outside the wall at the bottom of the picture.

Email ThisBlogThis!Share to TwitterShare to FacebookShare to Pinterest
Labels: Knight of the White Cross