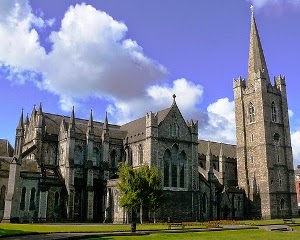 Thomas Minot, prebendary of Mullaghuddart, treasurer of Ireland and also for a time escheator of the kingdom, succeeded by the pope's provision and was consecrated on Palm Sunday in 1363. In the year 1365 the controversy respecting the primatial right was renewed between him and Miles Sweetman, archbishop of Armagh. About the year 1370 Minot repaired part of St. Patrick's church, which had been destroyed by fire, and built the high steeple of hewn stone. In June 1385 he died in London and the care of the temporals of the archbishoprick was committed to the bishop of Meath.

Robert de Wikeford, archdeacon of Winchester, doctor of the civil and canon laws and fellow of Merton College was advanced by Pope Gregory IX to the see on the 12th of October 1375 and consecrated before the close of the year. In 1377 he was appointed chancellor of Ireland, again in 1385 he was appointed chancellor. He obtained leave of absence in 1390 for one year to visit England and, in the interval, died on the 29th of August 1390.

Richard Northall was promoted to the see in 1396, was a Carmelite friar, the son of a mayor of London and was born near that city. His reputation for preaching learning and other acquirements attracted the notice of the king who procured him the see of Ossory in 1386. Having sat in the chair of Ossory about nine years he was in 1396 translated to the see of Dublin, a promotion which terminated in his death on the 20th of July 1397. He was buried in his own church.

Thomas Cranley, a native of England, a Carmelite friar, doctor of divinity, fellow of Merton College and warden of New College, chancellor of the University of Oxford, was appointed to the see and was consecrated in 1397. He filled the office of lord chancellor of Ireland in that year and again in 1401. In 1416 on Lord Furnival's departure for England, Thomas was his deputy in the government of Ireland. About the end of 1417 he went to England, where he died at Faringdon, full of years and honors on the 25th of May of the same year. His body was conveyed to Oxford and interred in New College, of which he had been the first warden. He was a prelate in high reputation, for his wit and pen was liberal, and fond of alms deeds, an excellent preacher, a great builder and improver of such places as fell under his care.

Richard Talbot, precentor of Hereford, was consecrated archbishop of Dublin in the year 1417. Richard was descended of a noble family and was brother to the celebrated warrior John Talbot, Lord Furnival. In 1423 he was lord justice and subsequently lord chancellor of Ireland. In 1443 on the death of John Prene he was elected archbishop of Armagh but, on declining it, John Mey was promoted to the primatial chair. Richard sat in the see almost thirty two years and all this time was of the privy council of Ireland. He died on the 15th of August 1449 and was buried in St Patrick's church before the steps of the altar.

Michael Tregury, doctor of divinity in the University of Oxford and some time fellow of Exeter College there and chaplain to the king, was consecrated in St Patrick's church archbishop of Dublin in 1449, was at an earlier period of his life esteemed as a man of eminence for learning and wisdom. In 1451 above fifty persons of his diocese went to Rome to celebrate the jubilee then promulgated by Pope Nicholas V. They who returned safe in 1453 brought the saddening news that Constantinople was taken by the Turks and the Emperor Michael Palceologus slain. The Archbishop Michael was so afflicted at the news that he proclaimed a fast to be observed strictly throughout his diocese for three successive days and granted indulgences to those who observed it, he himself walking in procession before his clergy to Christ church and clothed in sackcloth and ashes. In 1453 he was taken prisoner in the bay by pirates who were carrying off some ships from the harbor of Dublin. They were pursued to Ardglass in the county of Down, five hundred and twenty of them were slain and the prelate released. Having presided over his see twenty years he died on the 21st of December 1471 at a very advanced age in the manor house of Tallagh which he had previously repaired. His remains were conveyed to Dublin attended by the clergy and citizens and were buried in St Patrick's cathedral.

John Walton, or Mounstern, abbot of Osney near Oxford was advanced to the see of Dublin and consecrated in England and adorned with the pallium in 1472. In 1475, at the instance of the Dominicans and other regulars, Pope Sixtus IV issued his bull reciting the abundance of teachers but the deficiency of scholars in Ireland and sanctioning the establishment of an University in Dublin for the study of arts and theology and the conferring the usual degrees therein. In 1484 being blind and infirm he voluntarily resigned the archbishopric, reserving to himself as a maintenance during life the manor of Swords. On his resignation Gerald earl of Kildare, then lord deputy, forcibly entered and took possession of twenty four townlands belonging to the see and retained them to the time of his death, these may have been the lands which archbishops Talbot and Tregury alienated. In 1514 they were restored to the see and, in two years afterwards, they were again forcibly seized by the house of Kildare. In 1521 they were again awarded to the archbishopric of which undisturbed possession has since remained in the see. In 1489 five years after his vacating the see he again appeared in the pulpit of the cathedral and preached at St Patrick's church on the festival of the patron before the lord deputy and the nobles to the admiration of his hearers. The precise time of his death is not known.

Walter Fitzsimon succeeded in 1484, was official of the diocese of Dublin, bachelor of the civil and canon laws, a learned divine and philosopher, precentor of St Patrick's church. On the 14th of June 1484 Pope Sixtus IV appointed him to this see and he was consecrated in St Patrick's cathedral in the September following. In 1487 this prelate was one of those who espoused the cause of Lambert Simnel and who were accessory to his coronation in Christ church. In 1488 Walter was permitted to renew his allegiance and receive pardon through Sir Richard Edgecomb. In 1496 he was appointed chancellor of Ireland, in this year he held a provincial synod in the church of the Holy Trinity on which occasion an annual contribution for seven years was settled by the clergy of the province to provide salaries for the lecturers of the University in St Patrick's cathedral. Friar Denis Whyte in the year following, being old and infirm, surrendered the see of Glendaloch in the chapel house of St. Patrick's and, ever since, the archbishops of Dublin have, without interruption, enjoyed that see. Having filled the see twenty seven years he died on the 14th of May 1511 at Finglass near Dublin and his body was conveyed to St Patrick's church and there honorably interred in the nave. He is described as a prelate of great gravity and learning and of a graceful appearance.

William Rokeby was a native of England, doctor of canon law and brother to Sir Richard Rokeby, lord treasurer of Ireland. In 1498 was constituted lord chancellor of Ireland and afterwards advanced to the see of Meath by Pope Julius II in 1507 and was on the 5th of February 1511 translated to the archiepiscopal see of Dublin. In 1518 he convened a provincial synod enacted some useful regulations and in the same year confirmed the establishment of a college of clerks founded at Maynooth by Gerald earl of Kildare. Archbishop Rokeby died on the 29th of November 1521, having a few hours before his death given to every one belonging to the priory of Christ church a piece of silver in testimony of his blessing and prayers. According to the instructions of his will his body was sent to England to be buried in his new chapel of Sandal, a fabric of singular beauty.

Hugh Inge, doctor of divinity succeeded him in his see of Meath and in the archbishopric in the year 1521. Hugh was a native of England and born in Somersetshire, was made perpetual fellow of New College in Oxford AD 1444, took his degrees there and, leaving it in 1496, travelled into foreign countries. In 1512 he was made bishop of Meath, which he governed ten years. In 1521 he succeeded to the see of Dublin and the year following obtained the temporals. In 1527 he was constituted chancellor of Ireland and was esteemed as a man of great probity and justice. He presided six years and died in Dublin on the 3d of August 1528 and was buried in St Patrick's church.
Posted by Unknown at 18:52 No comments: